On behalf of the relatives of those who perished and were seriously injured in the La Mon Hotel terrorist atrocity forty-three years ago, a bouquet of flowers was laid at the La Mon Commemorative Seat at the Island Civic Centre in Lisburn on Wednesday 17 February 2021. 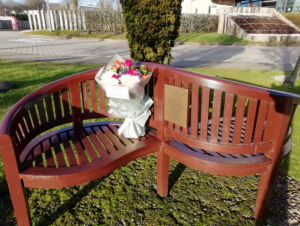 Due to the on-going restrictions as a result of COVID-19, no commemoration service was held, but the victims were remembered this year as every other year.

It is important to remember the victims and to acknowledge the pain and anguish that is still felt today and has been heightened because of present circumstances. 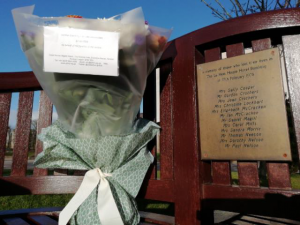 The victims’ campaign group, Ulster Human Rights Watch (UHRW), has said the ruling by the Court of Appeal on a Victims’ Payment Scheme removes the last remaining obstacle to pensions being paid.

The Court of Appeal said the Executive had a legal duty to fund the scheme. It has given the parties four weeks to find a solution.

UHRW Advocacy Manager, Axel Schmidt, said: “This is a watershed ruling and one we most warmly welcome.

“The way this issue has been batted back and forth by the Northern Ireland Executive and the Government has been shameful.

“The absence of provision in the Draft Budget announced by the Finance Minister meant the stalemate would continue over who should fund the scheme – London or Belfast.

“Today, this ruling sweeps away the last remaining obstacle to the commencement of the scheme. There is no hiding place for either parties or Government to go to. The Finance Minister and his colleagues in the Executive have been told they have a legal duty to fund the long overdue scheme.

“For almost a year, innocent victims of terrorism have watched as the squabbling over who should pay and who should qualify was played out. The delay is callous and cold-hearted.

“The message today is to get on with the job and give some solace to innocent victims of terrorism who, frankly, deserve better treatment.”

Veteran’s Commissioner Danny Kinahan has written an open letter to all Veterans in Northern Ireland. We very much appreciate the support offered by Mr Kinahan, and in particular to the many victims of terrorism who also served in the Armed Forces.